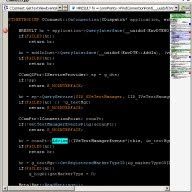 MetalScroll is an alternative for RockScroll, a Visual Studio add-in which replaces the editor scrollbar with a graphic representation of the code. Compared to the original, this version has a number of improvements:

I have used RockScroll for a while, but encountered some bad Visual Studio crashs if I changed from code view to the Windows Forms Designer and as a consequence I had to uninstall it. Later I asked Scott Hanselman (@shanselman), who released RockScroll on his website, if he could contact the RockScroll author Rocky Downs and ask him for the source code, so I could fix it and might release it as open source, but Scott Hanselman never got an answer from the RockScroll author. You can imagine how pleasantly surprised I was after I had read the MetalScroll news from Johan Andersson (@repi) today. 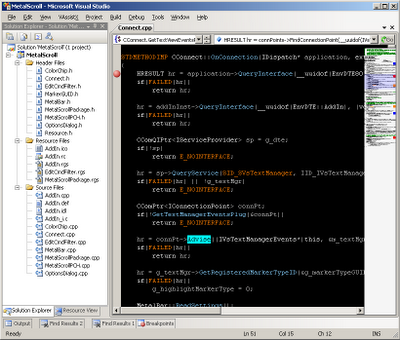 My favorite feature is not the smart Scrollbar nor the cool splitter, it's the word occurrence highlighting, a feature that I missed since I worked with Eclipse years ago.
MetalScroll works with Visual Studio 2005 and 2008 and it's free and even open source! So don't hesitate, download and install this great Visual Studio add-in now. You won't be disappointed.