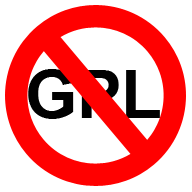 In the past I've released the source code that mostly comes along with my blog posts under the GPLv3 license to ensure that changes on the code always stay open and never get closed. But the GPL has a major drawback, it's too viral, which means if someone uses GPL licensed code the new code has to be released under the GPL too. And if someone uses this new code, the new code 2 has to be put under the GPL again and so on. And as the FSF states this even applies when the code is just linked dynamically with a GPL'ed library only except if it uses the GPL linking exception. That's why I wanted to move away from the GPL and searched for some alternatives. Finally I decided to use the Ms-PL license from now on if my work doesn't depend on GPL infected code. I've chosen the Ms-PL because it's approved by the OSI, it's short and easy understandable, the weak copyleft guarantees that changes on the original code have to be committed back and that it stays open and it could be used for commercial products. Jon Galloway (@jongalloway) summarized it nicely in his Twitter reply to me: "Ms-PL is essentially BSD + patent protection." So the Ms-PL is suitable, short, simple and keeps the trolls away.

I have changed all the source code headers and License.txt files and updated the Zip files with the source code you find linked on most blog posts. If you still find a GPL reference, just ignore it and if the Ms-PL is a problem for you, just contact me and I might put the relevant code under a second license.
Gepostet von Rene Schulte unter 8:12 PM