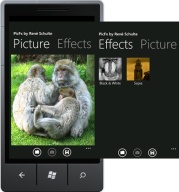 My new Windows Phone 7 article for Microsoft's Coding4Fun site is live. It's the first part of a short series about the development of a Windows Phone 7 picture effects application called "PicFx". The first article will show how to create the base Windows Phone application and how to implement some basic effects. The source code is licensed under the Ms-PL and can be downloaded from the CodePlex site.
I'm already working on the second part of the series, which will explain how to implement advanced effects (the cool stuff) and other features. After this article I'll add more features and important effects, enhance the existing effects and release it as "Pictures Lab" on the Marketplace.

Video
The video below demonstrates the Coding4Fun PicFx application features and also shows how it can be used. It was recorded with the application running in the emulator.