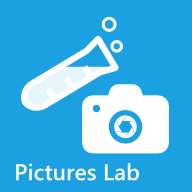 Windows Phone 8 now supports 3 different screen resolutions which is very nice since there are some great high resolution devices out there and the user has the choice and isn't forced into a one fits all model. However  there's also a downside for Windows Phone developers since now also 3 times the amount of screenshots have to be submitted to the Store. If an app has localized versions this adds up very quickly. For example, Pictures Lab supports 11 languages and the soon-to-released v5 update for WP8 also all 3 resolutions: 11 x 3 x 8 screenshots = 264! That's a crazy amount of mindless click-through work to take all those screenshots, not to mention the Dev Center submission process.
Unfortunately there is no automated way or better support by the tools, so one has to do this ridiculous amount of manual work.  In a future version of the tools I'd really love to see some kind of macro recorder which records certain steps including screenshot actions and can then use the recorded steps to play this for all supported app languages and generate the remaining screenshots automatically.

In this quick post I want to share some practices I used in order to reduce the work at least a bit for the Pictures Lab v5 update:

Of course there's a lot of room for improvements, but maybe the described practices help to reduce the friction that comes with localization at least a bit until a better solution is known.