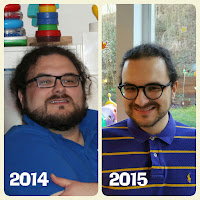 It's the last day of 2015 and therefore time for the annual recap of the year. For me it was a great year, on the private side of life as well as the professional life.

I'm still working from home for one of the best interactive agencies in the world with a group of fantastic people. I'm happy that I got back into computer graphics programming this year being able to work in the emerging space of virtual reality with devices like the Oculus Rift, Google Cardboard, Samsung Gear VR and more. Plus the next chapter which is being opened with new innovations in the field of Augmented and Mixed Reality.
I was also able to do a few talks at conferences and honored to speak at the //build developer conference again this year, this time together with my good friend and colleague Laurent.
Oh, and I got promoted to Lead UX Developer as well in 2015.

It was also a great year in my private life. My wife and I had our 10 year wedding anniversary and I love her more every day. Our four daughters are doing fine in (pre-)school and bring us joy every day.
For me personally it was an intense change too when I decided in February 2015 that it's finally time to loose some weight. By now I lost about 35 kilograms (77 lbs) by decreasing the energy input with (unhealthy) food and increasing the energy output with cycling. I likely turned a few more kilograms from fat into muscles through the training as well. I did some sweet bike rides like a nice 113 km tour around Lake Washington and Lake Sammamish in October when I was in the Seattle area and another 100 km+ ride a few days ago climbing into the Erzgebirge (Ore Mountains). In December alone I managed to ride more than 500 km while climbing 5200 meters up. Glad I reached this point considering I had 35 kg more to carry when I started in February.

For the next year I want to reduce my weight just a bit more and I'm also planning to ride my first Mountainbike Cross Country Marathon, the famous Erzgebirge Bike Marathon and some other nice challenges.
In the tech field I hope to be renewed as Windows Platform Dev MVP and being able to work more in the field of VR, AR and MR. I have the feeling it's another UX revolution happening right now. It's an exciting time to be a developer for sure. 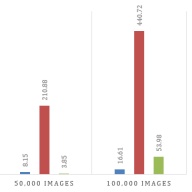 I was recently part of a project at IdentityMine where worked on a Xamarin application for the Amazon Fire TV Android platform. We faced some challenges which we love to address. One of which was the backend speed; however, this feature was out of our scope. Still, the client application needed to interact with the backend speed. Otherwise, with no data, there is no application.

I wrote a post about the learning experiences for the IdentityMine blog. If you are interested in client side development you might want to read it.
Gepostet von Rene Schulte unter 9:21 AM No comments: