This year I had a chance to give a presentation at Microsoft's largest developer conference /build 2016. It was actually my 3rd year in a row, now with 5 sessions delivered at /build. The last one was likely the best one so far.

In the presentation we showed a HoloLens app I have been working on since the last couple of months at IdentityMine. We talked about the challenges faced, how those were solved and shared some further best practices with the audience.

The slide deck can be viewed and downloaded here: http://bit.ly/holoflightbuild

A live recording of the presentation is available here.
A studio recording with better audio will be made available via the HoloLens Academy soon. The link will be posted once it's live.
Gepostet von Rene Schulte unter 1:54 AM 1 comment: 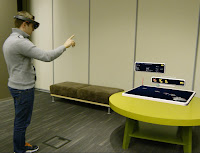 Hopefully these 10 recommendations for HoloLens development will help you to avoid some pitfalls and increase your productivity for creating awesome HoloLens experiences!
Gepostet von Rene Schulte unter 1:46 AM No comments: