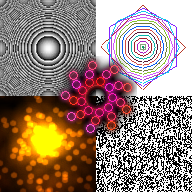 The WriteableBitmapEx CodePlex project site lives here. You might also want to see the Issue Tracker for a list of features that will be added in the future or to add your own. If you have any comments, questions, suggestions or want to see your name in the Credits list, don't hesitate and write a comment, use the Issue Tracker on the CodePlex site or contact me via any other media.
Have fun and let me know it if you do some cool stuff with it.
Gepostet von Rene Schulte unter 9:10 PM