Windows Phone Unplugged - How to Detect the Zune Software 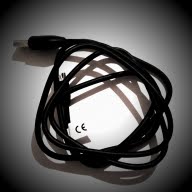 I've been blogging about Windows Phone development since the first CTP version and also blogged about the photo and camera API.
This post will cover a little trick my Pictures Lab app uses to detect if the Zune software is running when the device is connected to the PC. This is important because the device's media Hubs can't be accessed when the device is connected and the Zune software is running. The same is true for the media APIs (PhotoChooser, MediaLibrary, ...).
The Pictures Hub and the Zune Hub show a little animation when you try to open these while Zune is running. Unfortunately there's no built-in method to detect this in code.

An app mostly performs the classic IPO Model operations: load, process, save. The load and save steps can fail when Zune is connected. The following two code snippets show how to detect if the Zune software is running and ask the user to close it. I use the PhotoChooser and MediaLibrary here to demonstrate this exemplarily for picture handling, but the same is also valid for other media like audio.

Save fail
If the device is connected to the PC and the Zune software is running, an InvaildOperationException is thrown.
By the way, this blog post covered how to save a WriteableBitmap as JPEG to the device's media library.

This is quite straightforward.


Load fail
Unfortunately it's not that easy to detect if the Zune software is running when a picture is opened through the PhotoChooserTask API. (How to use this Task was also covered here.)


Some users contacted me when they tried to open a photo with Pictures Lab and nothing happened. The problem is that the picture viewer just won't open when the PhotoChooserTask.Show method is called and Zune is running on the PC. There's no built-in feedback here. I implemented the following code in the Completed event handler of the PhotoChooserTask to get a better user experience.
One might wonder why the MediaLibrary is queried when the PhotoResult EventArgs has the Error property. Unfortunately it's not used when Zune is running, only the TaskResult is set to Cancel in this case. This TaskResult value is also used when the user presses the back button while choosing a photo and it's not clear why the TaskResult was set to Cancel.

Fin
That's it.
I hope it helps.
Let me know if you found a better way.

The above photo was taken with a HTC Mozart and edited with Pictures Lab (cropped and Lomo effect).
Gepostet von Rene Schulte unter 10:20 PM