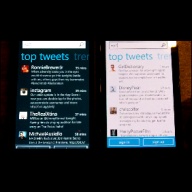 There were quite a few complaints about the Windows Phone's ListBox scrolling performance in the past. The Windows Phone team obviously heard it and heavily worked on the performance and responsiveness of the whole platform and the ListBox in particular. The touch input processing was loaded off from the UI thread to a new separate thread. Additionally the BitmapImage doesn't load the data on the UI thread anymore. I'm sure lots of other tweaks were implemented to increase the performance and the responsiveness of the platform. I think the Windows Phone team did a very good job!

Showdown
The video below shows a side-by-side comparison of a Nodo device with build 7392 and a prototype device with a Mango prebuild. The Nodo device on the left side is a Samsung Omnia 7, the Mango device on the right side is the ASUS prototype.
For comparison I use the official Twitter app build against 7.0 and in the second half of the video I show the effects preview list of my Pictures Lab app. This effects pivot item only uses a ListBox with a DataTemplate that contains an Image control with a fixed size and a TextBox for each item. So there's no background image loading being performed or any other heavy computing, just a static list with a lot of redrawing.


Background music is Taiga by SMILETRON
As you can see, it's quite a huge difference and even this Mango prebuild  runs very smooth on this rather old ASUS hardware. There's still some room left for more improvement, like the rasterizer, but imagine the boost on production devices with the final Mango version.
MANGO, MANGO, MANGO!
I don't have a deal with Microsoft or are paid to blog or tweet this. I'm just exited about all the goodies that are coming with Mango. Good times.
Gepostet von Rene Schulte unter 1:05 AM