During the next weeks I will not only be busy working on a bunch of HoloLens projects but also sharing some of the knowledge about HoloLens development.
I will be speaking at 3 European conferences starting end of May until early June including Unity's own Unite conference.
My talk will cover how to develop Mixed Reality apps for the HoloLens using Unity. I will cover an overview about VR, AR/MR, Unity, HoloLens and of course share best practices from all the months doing HoloLens development. Half of the talk will be dedicated demo time showing how to get started with HoloLens Unity development. We will build a little app that shows how to implement the foundation of every HoloLens experience: GGV input paradigm (Gaze, Gesture, Voice), Spatial Sound and Spatial Mapping. Altogether in a fun physics-based demo app.


Here's a sneak peek of the final demo app we are building in the session. 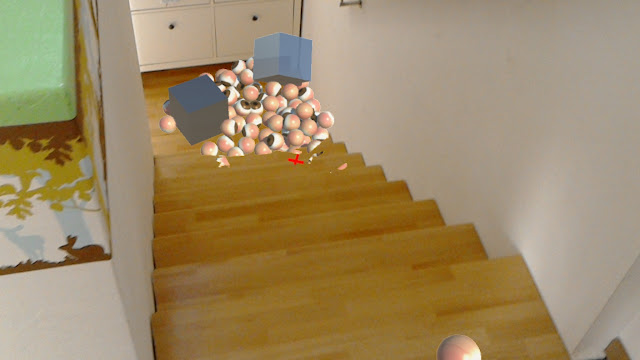 Now who's going to clean up all that #HolographicLitter in my house. Well, bloom gesture FTW!
Gepostet von Rene Schulte unter 10:22 PM