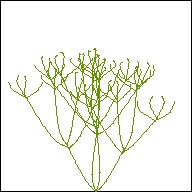 New features
The code listing on the project's CodePlex site was updated to show the usage of the new methods.
Live
I also wrote a new sample application that shows the spline methods in action. The sample starts with a demo animation that uses the Cardinal spline DrawCurve method to draw an artificial plant that grows procedurally. The other part of the sample is interactive and allows to draw and manipulate Beziér and Cardinal splines with the mouse. 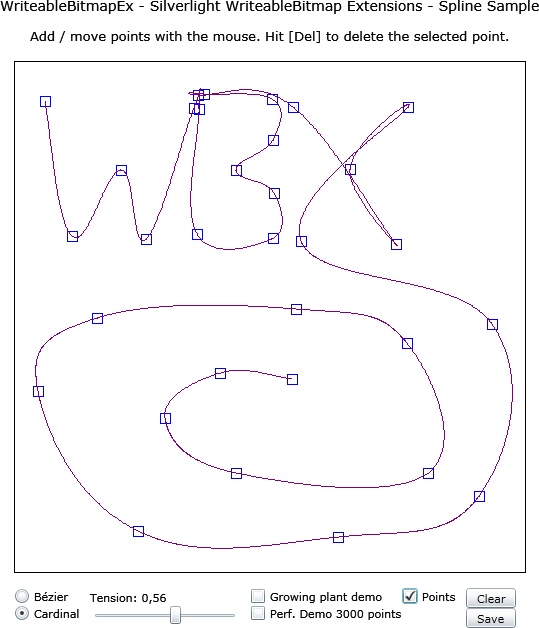 Uncheck the "Growing plant demo" Checkbox to change to the interactive mode where you can add new or move curve control points with the left mouse button. Press the DEL key while a control point is selected to remove it. The used curve type can be changed with the Radio Buttons. A cardinal spline needs at least 3 points and a cubic Beziér 4 points, a start point, the control point 1, the control point 2 and the end point.The Slider controls the tension of the Cardinal spline. The tension defines the shape of the curve and is usually between 0 and 1. A value of 0 would be a straight line.
Uncheck the "Points" Checkbox to hide the control points and press the Clear Button to remove all control points. Click the Save Button to write the WriteableBitmap to a TGA image file.
The other controls should be self-explaining.

Get it while it's hot
The WriteableBitmapEx library is hosted at CodePlex. You can find the new binary release here.