Silverlight 4 Up and Running 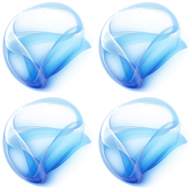 Woohoo! The final Silverlight 4 runtime and the developer tools for Visual Studio 2010 were released today and exactly three years ago the name Silverlight was officially introduced. A lot of great things happened in the Silverlight world since then and we now have a superb RIA platform at hand.

Future
The first beta of the next Silverlight version will most certainly see the light this year. Make sure to vote or suggest new features at the silverlight.mswish.net site. The most important feature suggestion for me is the GPU accelerated 3D support that I suggested a while ago and which was consolidated into this suggestion. If you agree with me, you should vote for it.